The Barēa B coaching team played a motivational video before the Alcorcón match, to stimulate the players with the idea of battling to reach the highest position in league history.

Psychology in football is becoming increasingly important for coaches. Without forgetting the technical, tactical, and strategic aspects, all the time coaches are using motivational factors to try to achieve the best results.

Pre-match videos have become a useful tool for many coaches. For example, Pep Guardiola used one before the Champions League Final in Rome, which caused sensation when it became public.

After announcing his departure at the end of the season, and after stating the objective of finishing in the top five, Luis Enrique asked his coaching staff to prepare a short music video that might help to stimulate the winning spirit in the players. 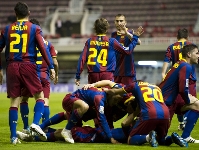 Old images of Barēa B games, mixed with moves and goals from the current team, made up a one and a half minute video edited by the coaching staff, which helped to motivate the squad just before the start of the last reserve game against Alcorcón.

The video begins with images of Guardiola and Carles Puyol in their daysin the Barēa B team and also includes images of other players from the current first team squad, playing in the Miniestadi, during their time in the B team.

These old images gave way to a series of spectacular moves and goals from the current Barcelona B team. The video ends with some enlightening graphics: "Our goal is to be the best B Team ever".