Barça B drew their match in Huesca in a very entertaining game. Tariq scored for the home team in the first half, and Barça equalised in the second, thanks to Benja. 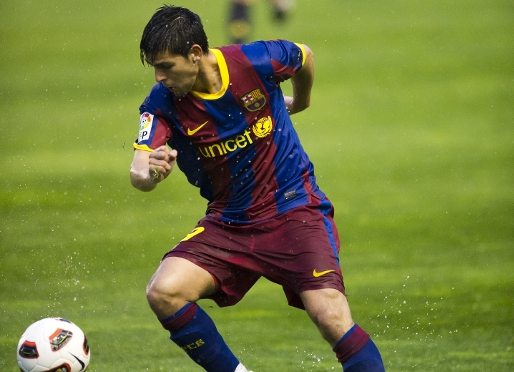 The Barça B players went onto the pitch wearing shirts in support of Eric Abidal. Dos Santos had a decent opportunity to score for Barça in the 4th minute, but the home side went ahead due to a great left foot strike from Tariq, in the 19th minute.

Onésimo Sanchez’s team defended very deeply, and Barça B tried everything to break them down, attacking down both flanks. Barça dominated possession but came up against a very aggressive and intense Huesca outfit.

Benja, with a header in the 28th minute and Nolito, who was fouled in the box, but the referee failed to give the penalty, were Barça’s most incisive players.

The aggression by the home side was punished by the referee when he sent off Molinero, following his 2nd yellow card, in the 38th minute.

Lots of chances for Barça

With a man extra, Barça B dominated the first 20 minutes of the second half, and they got their just reward when Benja scored after a terrific through ball from Soriano.

With the scores tied, Barça B maintained their dominance and created several very good chances. Benja, in the 12th minute, Soriano, in the 21st, and Thiago in the 25th, came very close to scoring, but the winning goal just wouldn’t come.

Just when it seemed that Huesca were in deep trouble, Onésimo’s side managed to re-organise, and took control of the game for the last 20 minutes, almost winning the game 3 minutes from time, when the referee disallowed a goal by Tariq.