Inferior only in effectiveness (1-2)

Rayo Vallecano converted two of their only three chances while Barça squandered a hatful to disappoint the 6000 supporters that watched a thrilling encounter.

The Miniestadi bore witness to a vastly improved Barça B that deserved much more than got form this game with Rayo.

Rayo went ahead in the first minute after taking advantage of a loose ball in midfield. Trejo finished the move by skilfully defying Rubén Mińo.

But the reserves refused to let that unsettle them and led by an excellent and motivated Thiago, plus Montoya and Nolito they commanded the play and an equaliser looked imminent. 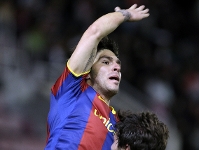 Edu Oriol, Nolito and Montoya all had clearcut opportunities, but the goal eventually came from Jonathan Soriano, who collected an expert pass from Dos Santos and stroked the ball into the back of the net.

As the half drew to a close, Barça B pushed forward in search of their second but a lack of effectiveness up front stood in the way, while Fontŕs hit the post in the 44th minute.

Rayo Vallecano gained more control of the game in a largely uneventful second half. Barça B still had the lion’s share of the possession but failed to turn that into chances, while Rayo scored through Armenteros in their first attack of the half with a tremendous left footed finish that Mińo was powerless to keep out.

The reserves never let their head dropped and pursued an equaliser with intent, and Rafinha, who had substituted Dos Santos really should have scored in the 33rd minute after an individual run by Nolito. Soriano also came close with a terrific strike with seven minutes to go, but Barça B were eventually in a beaten in a game they really didn’t deserve to lose. 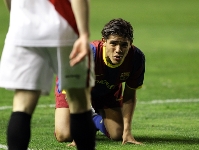