Riverola on loan to Vitesse

Riverola on loan to Vitesse

Barça B midfielder Martí Riverola will play on loan with the Dutch team Vitesse until the end of the season.

“It’s a good decision for the player and the club” explained assistant coach Joan Barbarŕ. 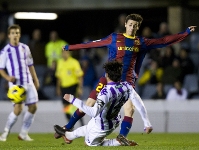 The 19-year-old Barcelona lad, is in his first year as a n amateur at the club and has played in 4 of the 18 games so far this season and Barbera commented: “the player asked us about the move and it’s a good option. They are a Dutch first division team and he said he wanted to give it a go”.

Vitesse are managed by ex.Barça favourite Albert ‘Chapi’ Ferrer assisted by the ex-Youth team trainer Albert Capellas and the two have decided to make a bid for Riverola as they attempt to lift the side out of the bottom half of the table.. 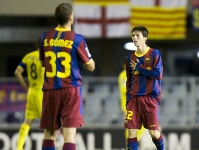 Josep Guardiola, who took the youngster on the Asia Tour in the summer and used him in the Catalan Cup , backed the decision and explained: “we have a big B team squad. They’ve agreed a deal and we understand that if he goes there and gets a taste of the Dutch league, it’s very similar to ours. It’s a good way to grow and get game time in” Riverola is one of the few players who started in the Escola del FCB and has reached the B team. Guardiola wished him well and declared “I hope it all works out”. 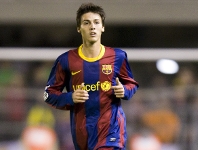 Barça player through and through

Martí Riverola will be back at the club once his loan at Vitesse is over, as he has a contract with the Club until 2012.

Martí Riverola joined the Escola del FCB when he was just 6 years old in the 1999/00 season he played with the Benjamín B team. Since then he has moved up through the various youth categories and reached the B team.