Oriol Romeu has broken a meniscus bone in his right knee and will be our for between three and five months, while Cristian Tello has a groin strain and will be sidelined for between 10 and 15 days.

The point won in the Canary Islands (2-2) has had negative knock-on effects for Barça B. Luis Enrique will be without Cristian Tello for two weeks and Oriol Romeu could be out for as many as five months.

Both players were injured in unfortunate accidents at the Insular in Las Palmas. Tello was substituted in the 9th minute by 9 Edu Oriol, while Romeu battled on to the end.

Medical studies have revealed that Oriol Romeu has a worse injury than feared. The broken meniscus in his right knee will require surgery on Wednesday.

The same doctors have also diagnosed Barça B’s Cristian Tello has having a light groin strain, which will mean an absence of a around a fortnight for the youngster from Sabadell.

Any injury is bad news, but on the positive side there is plenty of strength in depth to cover for the absentees. Luis Enrique has 26 players, enough to cover not just for injuries but also for occasional first team responsibilties.

Oriol Romeu can be replaced by any of Ilie, Riverola, Sergi Roberto, Jonathan Dos Santos or even Fontŕsm while Tello’s right back spot can be covered by Carmona, Vázquez, Benja, Edu Oriol or Rochina. And if things really get desperate, the team can always draw on support from members of the Juvenil A team. 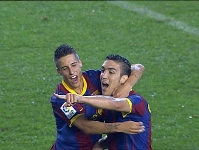