Barça B came back from a goal down in Las Palmas, with goals from Soriano and Edu Oriol, but were unable to finish off their hosts, for whom Samuel equalised to make it 2-2 and ensure Barça’s sixth draw on the run.

The New Year brought no change for the B team, who’ve now drawn six games on the trot. It looked as if they might break the run when Edu Oriol scored on 78 minutes to put them 1-2 up, but a late strike from Samuel earned the hosts a point.

Jordi Masip was forced to pull off two good stops from Jonathan and Armichi in the first four minutes as Las Palmas made a lively start, but Barça soon began to get a grip on the game and make their own chances, with Saúl Berjón failing to put away the best on 24 minutes when he was one on one with the keeper. 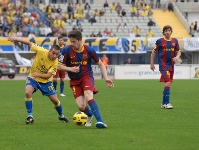 Just a minute later, Abraham did well out on the left to set up Saúl again, but once more he let the hosts off, an error the team were forced to regret soon after when Jonathon combined on the break with Javi Guerrero, who chipped Masip to make it 1-0.

Luis Enrique’s team showed plenty of New Year’s resolution though and with Edu Oriol dominating down the right with his speed and skill, a goal looked certain to come. However, the Las Palmas keeper made a great stop from Dos Santos to keep out Barça’s best effort and the teams went in 1-0 at the break. 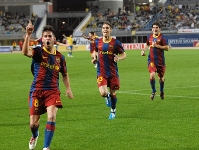 Barça B continued to dominate in the second half, with Soriano and Saúl both coming close before Soriano equalised with a header on 74 minutes. Las Palmas tried to hit back and push forward, but a lovely piece of skill from Edu Oriol saw him chip the keeper to put the B team ahead five minutes later. 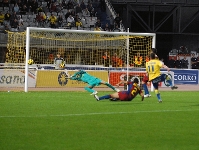 It looked as if that would be enough to give Barça the points, but a corner three minutes from time led to a Samuel header which beat Masip and condemned Luis Enrique’s youngsters to another draw. 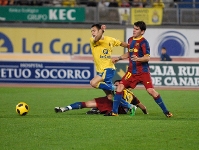