The Chilean striker is back in the 21-man squad for the Champions League match against Viktoria Plzen. Cuenca and Oier are also included for the trip to the Czech Republic. 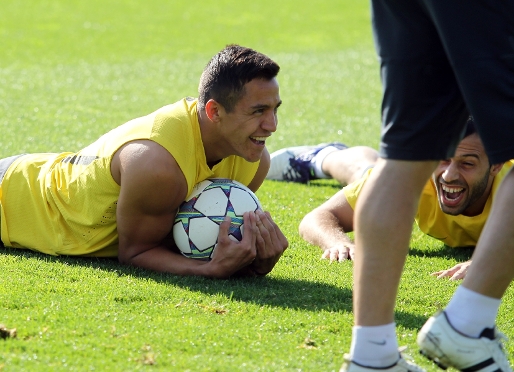 More info
Alexis Sánchez has been added to the squad for the first time since picking up his muscle injury on 10th September. He will travel to Prague on Monday despite not yet having been given the all clear by Club doctors. The players will train on Monday in the Eden Stadium and then a decision will be taken on the South American star’s fitness.

The squad is made up of the 19 available first team players plus Isaac Cuenca and Oier Olazabal from the reserves. Olazabal has been taken along as a precaution against last minute injuries to the senior goalkeepers during Monday training, as connections between Barcelona and Prague would otherwise make it impossible for him to join the squad in time for the match. Pedro and Afellay miss the game through injury.

The players were back in training on Sunday morning after their 5-0 drubbing of Mallorca. As usual after a match, it was a light session for most of them. They were joined by 11 players from Barça B: Cuenca, Montoya, Deulofeu, Soriano, Gustavo, Espinosa, Sergi Gómez, Rosell, Rodri, Armando and Masip.