The manager says neither as a player or a coach has he known “a footballer that demonstrate the level Messi shows every three days …Nothing that we do would be possible without him”.

Josep Guardiola was also asked for his opinion about Eusebio Sacristán’s B team. “There is a lot of talent in the reserves” he said. “They’ve got off to a slow start, but you must remember that they hardly had a preseason because there were hardly any players. Now they’re all coming back. I think the team will have a good season. What they have to do is stay up, and finish as high as possible, and they have to learn concepts, get to play and move onwards. They have just got two wins that will do them the world of good”.

Speaking to the press ahead of the league game at the Camp Nou against Mallorca, Josep Guardiola has singled out Leo Messi for praise, saying that he has never worked with anybody who can produce brilliant football with such consistency as Messi.

“I don’t think there has ever been a player in history that can do what he manages to do every three days. It’s unthinkable. People buy tickets just to see him play and he is doing something unique. To find a player that has managed to be so consistent for four years. Who is so fit, who fights so hard as him. I’ve never seen anything like it, such consistency … perhaps I’m too young, but I never played with anybody like him and I have never coached a player like that either. He is a better player than anybody else, he has a gift”, said Guardiola to the reporters in the Ciutat Esportiva Joan Gamper pressroom.

Guardiola added that his star striker “knows very well what we all think, all of the coaching staff, the people that look after him, and the other players … We are all delighted with what he does, has done and will do. And of course nothing that we have done would have been possible without him. He is a different kind of player, his stats make him different and he lets you win games at all levels … There is never a game in which he doesn’t generate play. It’s undebatable as far as we’re concerned. If there is any debate, then so be it, but it doesn’t weaken him and it won’t weaken him”.

On Mallorca, who FCB play on Saturday, Guardiola said “they have their weapons. Mallorca is a team which character, which Caparrós gets into the players, and they’re a difficult opponent. We will have to play with our heads if we want the three points … We will have stick to our way of generating a lot of chances and making sure they don’t”.
Guardiola will have both Carles Puyol and Gerard Piqué back in the side now that they have been declared fit. He said that “it is always good news because the more we are the better. Whether they’ll get to play is something we’ll decide tomorrow”. 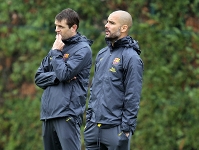 Asked about the tendency to only judge the team in the short term the manager answered that “that doesn’t matter. I go by what I see in the matches. We may play well or badly, but we never fail to respond. Generally, they’re playing more than excellently and I’m more than satisfied. We are on good form and I’m delighted with what the team is doing. We have never been made to look like fools in four years, and that’s not easy in sport. That’s the greatest value of this team, and without that we would never have won 12 titles out of 15.”

He added that winning by huge margins is not always a good thing because it can lead to confusion. “Sometimes it can be positive not to be so brilliant. It is not always good for us to win games by high scores because then people tend to start thinking that that is what should always happen”.