Dani Alves reckons that Saturday night’s result: “is a clear demonstration that everything is hard and nothing comes easy”, whilst insisting Barça: “are a great team, win lose or draw”.

The death of Marco Simoncelli in today’s Malaysian Moto GP Grand Prix has come as a big blow to the whole sporting world and Alves commented: “it’s very sad indeed. When you compete to the limit, that kind of thing can always happen. It’s a terrible thing. It reminds you that you have to value life, because something like this can happen at any time. You have to live every day as if it were the last”.

Although they had plenty enough chances against Seville, Guardiola’s team were held to a goalless draw against Seville and although Alves admitted the result left the players: “with a bitter sweet taste”, he insisted: “everything that gives us something is positive. That’s football and you have to get over it”.

In the same tone, the Brazilian explained that results like Saturday’s don’t create any doubts in the squad: “everything is hard and complicated, but there is no way that this will make us doubt in ourselves. We are a great team – win, lose or draw. We have shown that over the years and one result won’t change that”.

Dani Alves believes that Seville: “are one of the best teams in terms of defence that we’ve seen here. They did a fantastic job, keeping their lines close, closing down any space we might use for our short passing game. Even so, we made plenty of chances. That’s football. Seville are one of the big teams in this league and they are bound to be in there at the end of the season. This won’t be a two horse race because all the other teams fight hard and it’s always going to be tough to win games, but we will finish top in the end, even though it will be very complicated”.

No racist insults by Cesc

Alves also insisted that Cesc Fabregas certainly didn’t use any racist language to provoke Kanoute’s red card on Saturday: “they are moments when you are all fired up and you aren’t going to go around saying please and thank you, but there was no racist insult and certainly not from Cesc who is a great guy and would never do that”.

The ex-Seville man also made it clear that: “I’m fed up with all this business about players saying I only reacted because you provoked me – if I reacted to every provocation I’d be going for an early bath every game”. 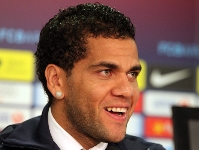 The draw also meant that Real Madrid are for the moment at least, on top of the table, but Alves reckons: “that’s just a side show at this point. They are the leaders and of course they will be happy about that, we are behind them, but there is a long way to go yet and many things will happen I’m sure”.

Finally, Alves referred to Messi, who missed that late penalty: “you only miss them if you take them. Messi’s qualities are about much more than a missed penalty. It’s just a one off and there’s no need to go over it any more”.