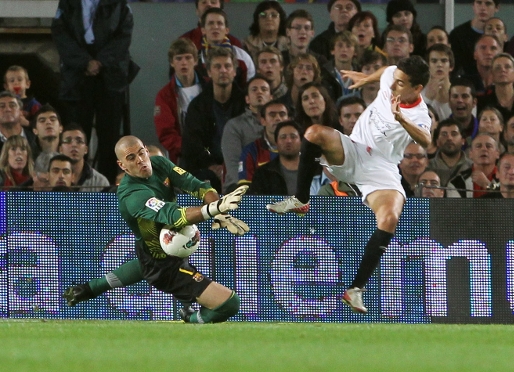 Photo: Miguel Ruiz - FCB
In the 57th minute of the game Victor Valdes achieved a new record for himself. The Barça keeper beat his own personal unbeaten record, which now stands at 607 minutes after tonight’s game. Thus Valdes breaks the record he set last season when he kept a clean sheet for 577 minutes. ´

The last player to score against Valdes was Pablo Hernandez, in the 23rd minute of the game that Barça played away at Valencia on the 5th match-day. On Tuesday, away to Granada, the Barça goalkeeper may have the chance to increase his record.

Valdes has now gone eight league games at home without conceding a goal, matching his previous record between the 1996-97 and 1997-98 seasons. The last player to score against Valdes in the Camp Nou, in a League match, was Corona, for Almeria.