This Saturday Xavi Hernandez played his 391st League match for Barça, equalling the record that was held up to now by Migueli. 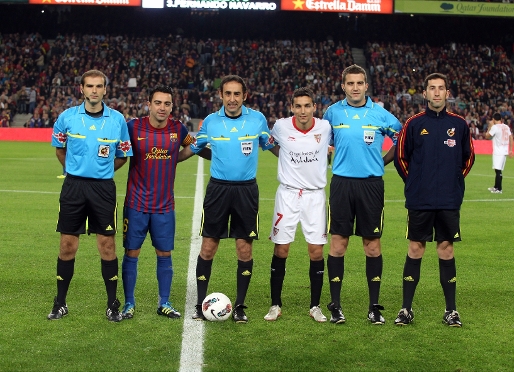 The Barça mumber 6, who wore the captain's armband, has experienced a new unforgettable day in his club career, in which he’s already won 18 titles. Against Sevilla, Xavi equalled the number of games played by 'Tarzan' Migueli, up to now the player who had played more games for Barça in the League.

It's been over 13 years since the midfielder made his debut in the League, on 3rd of October 1998, away to Valencia (Barça won 3-1). Now, almost 32 years old, he’s equalled Migueli’s record, a player who wore the Barça shirt until we was over 36 years old.

After Migueli and Xavi, the list of Barça players with most matches is made up of Carles Puyol (351), Carles Rexach (328), and Guillermo Amor (311), all brought up through the youth system, except Amor.

Last season, Xavier had already passed Migueli as the player with the most official Barça matches, counting all competitions. The record was set at 549 games, which Xavi equalled on January 2nd, 2011, in a game against Levante, in which the two players shared the limelight. Now Xavi Hernandez, who has played in many more international games than Migueli (in the 70’s and 80’s, European competitions didn’t involve group stages), has 590 under his belt.