The coach is delighted that the new Masia is open and is named after “the great professor Oriol Tort … I hope it continues to work like it has for the last 32 years,” having produced today’s unrepeatable generation of stars.

Pep Guardiola was also asked what he makes of the ETA announcement of a permanent cease-fire. “That’s good news. It’s a very special moment for the country. And for many years” he said.
The inauguration of la Masia, Oriol Tort Training Centre on Thursday was an emotional day for everyone. Pep Guardiola was there, and praised the ceremony at the Ciutat Esportiva in today’s press conference. “It was a very emotional event. I celebrate the fact that it carries the name of the great professor Oriol Tort.” He hopes the “youth teams will be able to train in peace” at the new facility.

Guardiola knows what a good job was done at La Masia over the 32 years at the old location and has wished a long life for the new version. He knows that the current Barça generation includes 11 players that grew up there, but feels that the current situation “is an exception … I doubt that such a generation will ever be repeated”. 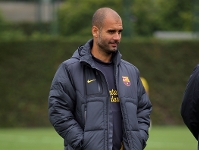 Guardiola thinks it will be hard to find anybody to replace Xavi, Iniesta, Valdés and company. “But while they are still here, it is good for the new youngsters to join them. But it is impossible to swap them piece for piece. It’s a very difficult process to consolidate them”.

He also spoke about Xavi, who could break the record for league appearances if he plays against Sevilla on Saturday. “He will be a hard player to replace, not just because of what he does on the field but also off of it. It is hard to find somebody who generates do much joy in the squad”.

But Guardiola has not been sidetracked from his duty of preparing for Sevilla’s visit to the Camp Nou. He reckons they “are one of the big teams … they haven’t lost any games so far, and that’s not by chance. Sevilla play first touch football and go straight for the goalkeeper.”