Ever since the Catalan has been manager of FCB, the side has never lost to the Andalusians. They have won every game against Sevilla apart from the draw at the Sánchez Pizjuán last season. 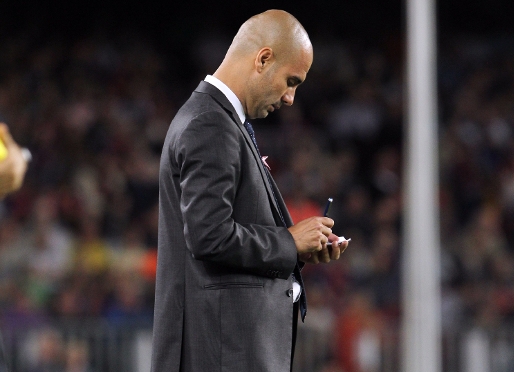 It’s almost always a happy ending when Guardiola faces Sevilla, for after six encounters, Barcelona have won five and drawn one.

Saturday’s game is almost at the same time of the season as the meeting last term, once again at 22.000, only last year’s game was one week later. On October 30, 2010, Barça put five past Sevilla with goals from Messi (2), Villa (2) and Dani Alves.

That is not the only time there has been a goal-fest against the southerners. In 08/09, Barça won 3-0 at the Pizjuán and 4-0 at the Camp Nou . The following season they once again won 4-0 at home, and despite leading 3-0 once again in the Andalusian capital, the return match ended 3-2 in a game that as good as decided the league title. And last season Guardiola got his most resounding win yet, a 5-0 drubbing of one of the biggest clubs in the competition.

They met earlier in 2011, towards the end of the last season, the only time Guardiola’s Barça has ever dropped points against Sevilla in the league. Bojan put the visitors ahead, but Navas replied in the second half. Despite the draw, Barça held onto their place at the top of the table and went on to claim the title.

Marcelino’s side is one of the form teams in Spain. They have won all four games at home and have drawn all their away fixtures, making them, along with Barça and Levante, one of the just three teams that have yet to experience defeat. They are currently in fourth place.