Cuenca, 6 minutes and an unforgettable memory

This Wednesday, Isaac Cuenca made his debut in an official match for the first team. He played six minutes in the Champions League that he will never forget. "It was wonderful. I didn’t expect to make my debut" he said after the game.

With ten minutes to go, Isaac Cuenca, one of the surprises in Josep Guardiola's squad for the game against Viktoria Pilsen, was not even warming up. Five minutes later, after the Villa goal that guaranteed the win, the B team player came onto the Camp Nou pitch to make his official debut with the first team. Cuenca replaced goalscorer Villa. It was the 87th minute and the public loudly applauded both players. "It was wonderful. I'm very happy" he said after the game. 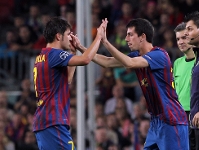 Isaac Cuenca, who this year has returned to the Barça B team after a season on loan at Sabadell, one of the teams promoted to the Second Division this year, has the confidence of Josep Guardiola, who’s called him up for first team training sessions several times. Tonight, he explained that the manager told him to play how he knows how to play: "He told me to play my football, attack their defenders, and keep up with the team’s play". To debut for Barça is something unforgettable. What will he do with his shirt? "I’ll treasure it and hang it in my room” he said.

"I didn’t expect it"

For Isaac Cuenca the last 24 hours have been like a dream. On Tuesday, with four first team players missing (Pique, Cesc, Afellay, and Alexis), Guardiola called him up, along with Dos Santos, to train at the Camp Nou in the penultimate session before the Champions League match. Both joined the team, and on Wednesday he was selected in the match squad. Unexpectedly, he made his debut in the final few minutes of the match: "I didn’t expect it, and less in the Champions League. Everybody, technical staff and players, have congratulated me. They made me feel really good".

About the result, he felt the 2-0 was less than the merits of the team deserved: "We created lots of chances. It was small reward compared to all the chances we had".