Guardiola: “These two games can qualify us”

Guardiola: “These two games can qualify us”

The Barça coach is treating the forthcoming encounters with FC Viktoria with maximum priority, for they could see the team through to the last sixteen. Guardiola has no intention of underestimating the Czech outfit.

Pep Guardiola attended to the press in the Ricard Maxenchs pressroom just a few minutes after listening to what Leo Messi had to say. On Wednesday’s Champions League fixture, he said he understands that people know very little about FC Viktoria, the Czech side appearing in the competition for the first time, but that if anybody is underestimating them it’s simply because they don’t know them. The FCB coach knows how difficult these matches can be “and so we always have to take them very seriously … we should not lose our respect.” This is his fourth season on the bench, and he knows that “we have always found it more difficult against small teams than against more famous ones”.

Two in a row against FC Viktoria 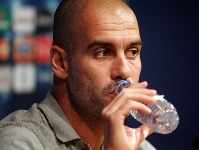 The Camp Nou is seeing Champions League football for the first time since the visit of AC Milan. Barça will be meeting the same Czech team in their fourth match, but away from home. The Catalans currently share the lead on four points with the Italians and Guardiola has stated that “the main objective is to win our next two matches. That would ensure qualification … the first game at the Camp Nou will be useful for getting to know them well, meaning we won’t be faced by any shocks in the return match”.

Pep Guardiola also spoke about Leo Messi, saying that it is the player himself who is responsible for his amazing progress. “Everybody has their own way of learning. He has found his and is passing the test … what we have to do is make sure that the best players get to see the most of the ball. Whatever else he does is exclusively his own work”.

Quality at the new Masia

On Thursday at 8.00 in the evening, the new Masia is going to be inaugurated at the Ciutat Esportiva. Guardiola, who grew up at the old building, has said that “the new facility makes up for what it is lacking in history with an improvement in quality. The club has created a fantastic Masia”.