Fontŕs to stay until 2015: “This gives me strength”

Fontŕs to stay until 2015: “This gives me strength”

FC Barcelona has announced that Andreu Fontŕs has signed a new contract on Monday that binds him to the club until the 2014-2015 season. The buy-out clause has been set at 70 million euros. 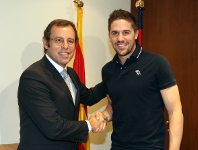 Centre back Andreu Fontŕs, who already had a contract until 2012, has extended it today in the club offices to four seasons through to 2014/15 as a first team member, while the buy-out clause has been increased from 30 to 70 million euros. “I am very, very happy” he told Barça TV and fcbarcelona.cat. “And rightly so after renewing for the Barça first team .”
Showing his worth

The player believes that this extension shows that the club trusts in him and now “more than ever I have to show what I am worth. It gives me additional strength to work as hard as I can every day and show what I’m worth”.

Fontŕs has only played in one game, the 2-2 draw at Anoeta, this season, but is not too worried. “I’m easy. I went through similar situations with Barça B and I know it’s very difficult. I’m at the best team in the world and playing with the best players in the world and I’m working hard. Little by little, the chances will come. I am living a dream that I hope never ends”.