Team has BARÇA MAGAZINE in its hands

Team has BARÇA MAGAZINE in its hands

Guardiola’s players have received copies of the latest BARÇA MAGAZINE, which opens with a report about the 11 players that learned the game at La Masia, and who appear together in a photo taken at the new Ciutat Esportiva. 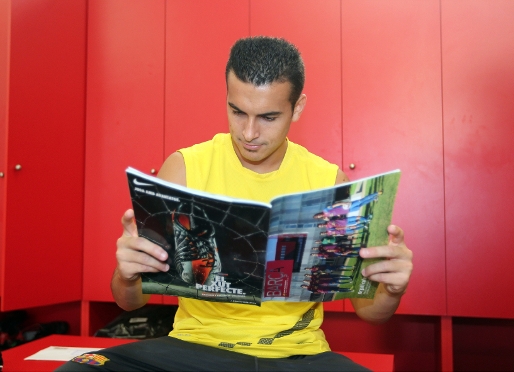 More info
Over the next few days, FC Barcelona members will start receiving copies of the new BARÇA MAGAZINE, which includes a report about the locally produced stars, speaking at the new Masia building. These players, along with the rest of the squad, have already been given copies of the publication.

This issue of BARÇA MAGAZINE brings together Valdés, Puyol, Piqué, Fontŕs, Thiago, Xavi, Iniesta, Pedro, Messi, Sergio Busquets and Cesc Fŕbregas, all of whom were once part of the Barça youth system and are now members of the first team.

The new Masia, Oriol Tort Training Centre is due to be officially inaugurated this coming Thursday October 20 at 20.00.