“The challenge is to better ourselves”

Iniesta: “The challenge is to better ourselves”

The midfielder knows very well that in order to enjoy further success this season, the challenge for the team is to have the ambition to better themselves. On the day of his reappearance, the player performed brilliantly.

Josep Guardiola’s side now has to play eight games in just 26 days. On this matter, Iniesta was pleased to say that “it’s what we like doing … the squad is focused on getting ready for each of these games as well as possible, training hard and being in the best possible condition for all the games we have ahead”.

After recovering from an injury sustained against AC Milan in the Champions League, Andrés Iniesta excelled in his long-awaited reappearance against Racing Santander. In an interview with ‘El Marcador’ on Barça TV, the Barça player said he was happy with the way he is playing and added that “although there is still a world to go, the feelings I get from the squad are the kind that suggest things are going well”. But Iniesta is sure that “every year it gets harder to be better than the rest … it is important for the team to take this as a challenge, to always want to better ourselves”.

The importance of different styles

He then said that “doing what we did last year doesn’t mean we can assume we’ll achieve the same this time … the team must never stop learning and improving”, especially because “other teams do things differently when they play us”. So, Iniesta thinks that the second challenge is “to look for different ways of playing in order to counter the things our opponents do”.

Last night he played a role in creating both of Messi’s goals, the second of which was scored after his own amazing run had ended with the ball hitting the post, with the Argentinian following up on the rebound. Speaking about his colleague, Iniesta commented that “we always try to make the most of our qualities and play … every team has its virtues and defects, and we try to make sure that only a minimum number of things need improving últimes.” 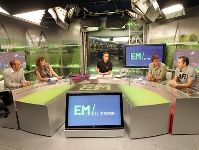 The FCB star also said that “I was desperate to return to action” and that in last night’s game he felt fine. “When you go out onto the pitch you always give 100 per cent, and it is very hard to think about reserving yourself. That isn’t my way of thinking, and neither is the way my team mates think”.

Iniesta admitted that “it is always difficult to play matches after international breaks … It’s not because you don’t want to, but it’s always difficult. Everybody is returning from somewhere and sometimes your opponents have had the whole week to prepare for the match. It’s always hard, but this time we managed to get three points and we’re happy about that”.