When Barça kick off on Saturday night they will already know how Real Madrid and Valencia have got on, whilst Llevant are playing on Sunday, when they entertain fourth place Malaga. 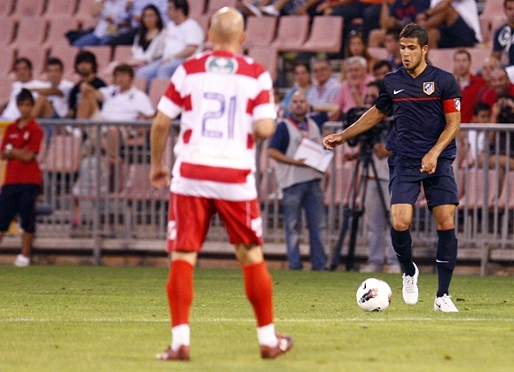 Photo: www.clubatleticodemadrid.com
The weekend kicks off at 18.00 on Saturday with three games, with Real Madrid at home to Betis, Getafe taking on Villarreal and Valencia travelling to Mallorca, whilst Granada and Atletico Madrid then play at ten.

Betis made a great start to the campaign, but lost their last two games before the break to drop to seventh and on Saturday they face a tough trip to the Bernabeu, where Madrid have scored 10 goals over their first two league games. Betis boss Pepe Mel believes “we can beat anybody – Betis have beaten Madrid lots of times – though they did score six in half an hour against us last time we came here!”. Valencia are level on points with Madrid and will travel to Mallorca, where new boss Caparros makes his debut, with Emery likely to make changes ahead of this week’s Champions league game against Bayer Leverkusen.

Llevant and Malaga will both be happy with the starts they made to the season and Sunday’s clash between the two promises to be a fascinating clash of styles, with Pellegrini’s big money signings beginning to gel – Malaga are unbeaten in the league since their opening day defeat to Seville – up against a Llevant team who are still unbeaten and have won their last four games, including victories over Real Madrid, Espanyol and Betis.

Negredo out for Seville

Seville are also unbeaten in the league, though they are sixth, a point behind Madrid, Valencia and Malaga, and on Sunday, two days after celebrating their 104th anniversary, they are at home to the bottom club Sporting, who they will face without leading goal scorer Negredo, who is injured. Atletico Madrid lead the chasing group of teams – though they are only on eight points, four adrift of Betis and Seville, and they will travel to next to bottom Granada on Saturday night without the Argentinean Salvio who was injured with his national team during the break.

Espanyol went down to two goals from their ex-captain Luis Garcia at Zaragoza earlier in the season and they will be hoping that another ex-favourite, Raul Tamudo, doesn’t do the same when they travel to Rayo in an attempt to pick up their first away points of the season. Bilbao are a point behind Espanyol and after beating Real Sociedad a fortnight ago in their first Basque derby of the season, they face Osasuna in their second on Monday night to finish off the weekend’s games.