The Multiusos de San Lįzaro witnessed, on October 12, 1996, one of the greatest goals in Barēa history. Ronaldo took the ball from the centre of park to go round everybody and score against Santiago de Compostela.

More info
FCB were top of the league and unbeaten when they went to take on the side then coached by Fernando Vįzquez. They would win by a fantastic 5-1, but the game is best remembered for one amazing goal that had the crowd on its feet and Bobby Robson’s hands on his face in awe. A manager of his status presumably thought he’d seen it all … until that night. 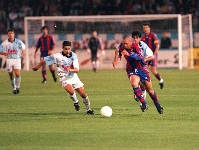 It took 11 seconds, 14 touches of the ball and one goalkeeper left floundering. A goal that very few are capable of emulating. Ronaldo had recently signed for Barēa at the age of just 20. The Brazilian stole the ball in midfield and made off an electric run. He swirled around everything that was put in front of him and then finished the move to perfection as he defeated the oncoming goalkeeper Fernando. It was already his fifth goal in a Barcelona shirt, and he would go on to make history by scoring 34 goals in 37 league matches.

“I was facing the most difficult season of my life”, said Bobby Robson to the Recorda Mķster show on Barēa TV many years later. The Geordie had to fill the illustrious shoes of the Dream Team coach Johan Cruyff. That season (1996/97) the club ended up winning the Spanish Supercup, Cup Winners Cup and Copa del Rey. The only title Barcelona missed out on was the league, which slipped away at the final instant.