70% of goals scored by home-grown players

FC Barcelona have scored 37 goals this season, and 26 of those have been scored by products of the club’s own youth system. Eight were scored by imported players, and three were own goals. 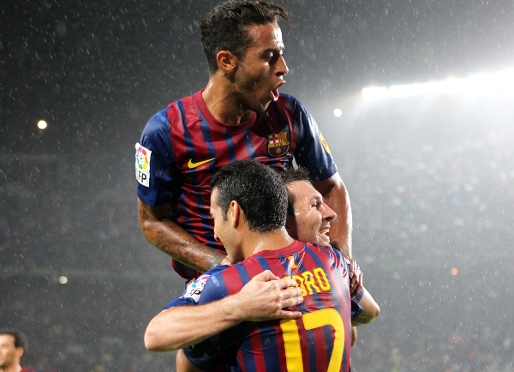 The season has just started, but it looks like locally groomed talent is going to play just as a big a role in this season as in previous ones. Of the 21 players in the first team, 11 came up through the youth system.

Messi is once again leading the team’s scoring, and is on course to be the league’s top scorer, or even the top goalscorer in all of Europe. He already has an amazing 14 goals to his name.

Barça’s new signing is enjoying his highest scoring start to a season as a professional. He found the net in the first four league fixtures and also scored the deciding goal in Monaco. He has five goals in all.

The Canary Islander has scored three goals. He was on target at the always difficult Mestalla in the league and has also scored twice in Europe, against Milan and BATE.

Xavi, with two goals, and Thiago and Iniesta, with one each, are the other former youth team players that have scored this season. Being attacking midfielders, we can expect both Iniesta and Thiago to considerably improve on those tallies as the season draws on.