Argentina thrashed Chile 4-1 in the first game of the qualifying phase for the World Cup in Brazil 2014. Messi scored, two and a half years after his last international goal, and Higuain got a hat trick. 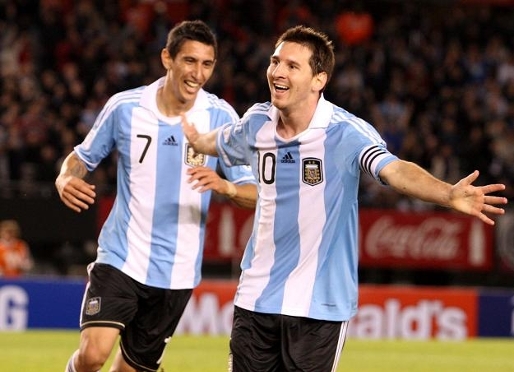 If Xavi Hernandez masterfully led Spain to victory against the Czech Republic (2-0), Leo Messi confirmed his role as leader of Argentina in the match against Chile, the first of the qualifiers for the World Cup in Brazil 2014, played at the Monumental stadium in Buenos Aires.

Messi, who played the whole 90 minutes, led the Argentine attack, and scored again after a drought of 16 games. Argentina thrashed Chile 4-1, the highlight of the game being the Higuain hat trick that confirmed his current great form.
Messi and Higuain seal the win in the first half 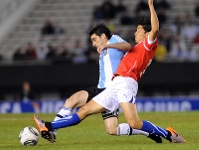 In the 25th minute, Messi finished off a pass from Higuain, to make it 2-0, putting an end to a two and a half year scoring drought with the national team. Chile, without Barēa’s Alexis, were uncertain in defence, and their attack failed to take advantage of Argentina’s slack defending.

Three more goals in the second half

The tone was the same in the second half. In minute 52, a half turn and shot by Higuain made it 3-0, making victory certain. Chile pulled one back with a goal from Mati Fernandez, but once again the lethal tandem of Messi and Higuain came onto the scene, and Higuain scored from a Messi pass to make it 4-1.

Adriano, a starter in Brazil's win against Costa Rica (1-0)

The Barēa player Adriano Correia started the match in Brazil's friendly against Costa Rica, played in the National Stadium in San Jose. The Barcelona full-back played the whole 90 minutes, whilst Dani Alves, who came on after 55 minutes, was instrumental in Brazil’s winning goal. His centre was finished off by Neymar for the only goal of the game. Ex Barēa player, Ronaldinho, started the game and took most of the plaudits of the local fans.