Second joint session with the reserves

Second joint session with the reserves

Due to the absence of the international players, playing with their national teams, the first team players who stayed in Barcelona, trained on Wednesday, for the second time this week, with Barēa B.

Barēa trained from 11.00, at pitch number 2 of the Ciudad Deportiva Joan Gamper, in the second of four training sessions planned for this week. These are sessions notable for the absence of up to 14 players who are away with their respective national teams.

This is why the four players who remained in Barcelona, Iniesta, Maxwell, Pinto, Fontąs, trained for the second consecutive day with the team led by Eusebio Sacristan. The B Team Manager kept a keen eye on the session, as Josep Guardiola also did. 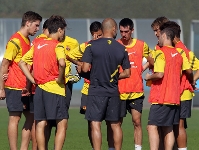 In the case of Javier Mascherano, who was working in the gym on Monday, and is suspended for the Argentina versus Chile match on October 7th, he has already gone to join up with his national team. Mascherano is available for Argentina’s second match, against Venezuela.

The first team players still in Barcelona have two more training sessions programmed, on Thursday and Friday at 11.00. Following that the players will enjoy three days off, and will not return to training again until Tuesday next week.