Apart from the signings from other clubs, the incorporation of Thiago Alcantara from the reserve team has been the third major 'signing' of the season. Thiago has played in all the League games, five as a starter. 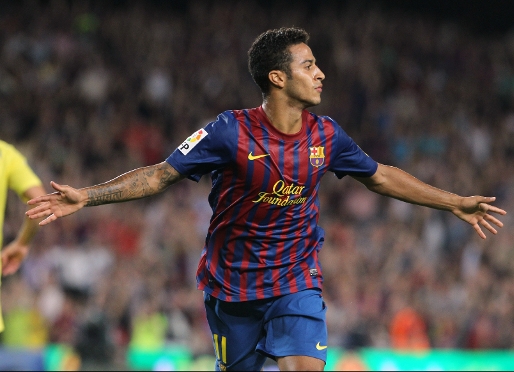 He’s winning his place, game after game. Thiago Alcantara, thanks to his hard work, commitment, and tactical discipline, in addition to his extraordinary talent as a footballer, is surprising almost everyone. The son of the Brazilian World Cup winning international, Mazinho (1994), is already, at the start of the season, a Guardiola fixture. 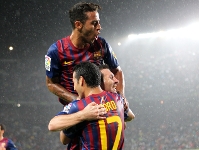 Full house in the League

Thiago Alcantara has played in all the League games so far. Against Villarreal, Osasuna, Athletico Madrid, and Sporting he played all 90 minutes. In Anoeta he was also part of the starting eleven, but was substituted on 61 minutes, while in Valencia, in the only game he didn’t start, he came on for the last 30 minutes. In total, Thiago has played 449 minutes in the League.

It just so happened that Thiago scored Barça’s first goal in the League this season, at the end of August. It was against Villarreal at the Camp Nou, and Thiago made it 1-0 with a left foot shot from outside the area to beat goalkeeper Diego Lopez.

One game in the Champions League 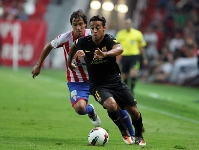 In the Champions League, Thiago has played one whole match: the big win against BATE in Minsk (0-5). However, he didn’t play against AC Milan at the Camp Nou in the first game of the group stage. In the matches corresponding to the two Super Cups, Thiago played in the first leg of the Spanish Super Cup, in the Bernabeu, as a starter, in the first official game of the season. He was replaced by Xavi after 57 minutes.

He doesn’t play in just one position. On the contrary, his versatility and adaptability make the young player a priceless wild-card. He can play anywhere in midfield, and can also play up front. In recent matches he’s played wide on the left, but has made his classic diagonal runs, to pressurise opposing defenders, or to help his teammates up front.