Iniesta has recovered from the hamstring injury sustained in the Champions League against Milan. The midfielder was given medical clearance after taking part in a training session involving mainly Barēa B players.

More info
After pulling a hamstring against AC Milan on September 13, Iniesta is back to full fitness. 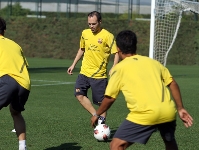 He was told the good news this morning at the Ciutat Esportiva after a session in which Pep Guardiola was bereft of all of the players that have been called up for international duty. So, the only first team players on pitch number 3 were Iniesta, Maxwell, Pinto and Fontąs, training in the company of the Barēa B squad.

Javier Mascherano, who is suspended for Argentina’s game against Chile on the 7th, worked out in the gym. He will be flying out to join the rest of his international team mates later this week to prepare for their second World Cup qualifier against Venezuela.

Cesc Fąbregas, who got injured on Saturday, is still recovering at the Ciutat Esportiva. Meanwhile, Abidal, who hurt his hamstring at El Molinón at the weekend, is not as badly injured as had been feared, and was able to travel to join the rest of his French international team mates.