Pep: “It is always hard to beat Sporting”

Pep: “It is always hard to beat Sporting”

Having analysed Sunday’s game in depth, Guardiola is aware that Sporting is one of the teams his Barça finds hardest to beat. He has a lot of respect for the team and the fans at El Molinón and is not overly concerned about injury issues.

“I am worried about particular things, but not the recent succession of muscle injuries. There are always injuries in football and there always will be”, said Guardiola, who does not feel Cesc’s hamstring injury has anything to do with the other injuries suffered by the team.

The first time Guardiola faced Sporting as a manger, his side won 6-1, but it has not always been so easy to break down Preciado’s teams. “It is one of the games we have found the hardest and the scores have always been close. We always find it hard to beat Sporting because they defend very well and have an intense ground where the fans help them a lot. But we even find it hard to beat them when we’re at home”.

This has not been a great season so far for the Asturians, but Guardiola doesn’t think his counterpart’s job is on the line. “They won’t sack him. If anybody has done things for that team, it’s him. He’s saved them every year and they’ve been in some very difficult situations. He always pulls it off and this year will be no exception.” 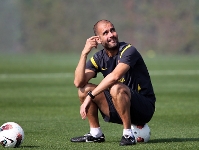 Guardiola admits that it’s always a setback to lose players to injury, but knows that is all part of football. Describing what happened to Cesc, he said “he was going in for a cross and overstretched himself, he scored the goal but got hurt. But luckily it’s not too serious and he’ll be back once the international break is over”.

He added that Cesc usually takes exceptionally good care of himself and works hard on injury prevention, but that all the same, these things can happen. He doesn’t think there are any more injury worries at the moment than there were this time last season.

Carles Puyol is back in the side after taking a nasty knock in Minsk, while he insisted that although Alexis has been given permission to return to Chile to recover from his injury, that does not imply that he can play for his country. “At first it was important for him to be here, but at the current stage of his recovery he can go to be with his family and one of the club’s physios is travelling with him. He has permission to go to Chile but not to play for the national team”.