Puyol and Cuenca named in 18 for Gijˇn

Puyol and Cuenca named in 18 for Gijˇn

Josep Guardiola has picked 18 players for the game on Sunday evening in Gijˇn. The list includes captain Carles Puyol, who is back working with the squad and Barša Bĺs Isaac Cuenca, but Cesc is out through injury.

More info
18 players will travel to Gijˇn on Sunday for a tricky match against Sporting, where Barcelona only drew last season (1-1). Seventeen members of the first team travel, following the injury to Cesc FÓbregas today Carles Puyol is also in the side after recovering from a rib injury sustained against Borisov midweek, plus Isaac Cuenca, of Barša B.

The injured Afellay, Alexis and Cesc are all put through injury, and although AndrÚs Iniesta did join today’s training session, he is also left behind.

The players will travel to Asturias on Sunday at midday, arriving in Gijˇn around 11.45, eight hours before kickoff. 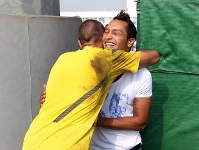 There was a former Barša man watching today’s session, Jeffren Sußrez who is currently on the books of Sporting Lisbon. He greeted the players who were his team mates until just a few months ago and spoke to several of them at length.