The Spanish manager has announced his squad for the European Championship qualifiers against the Czech Republic and Scotland. There are nine Barça players in his team. 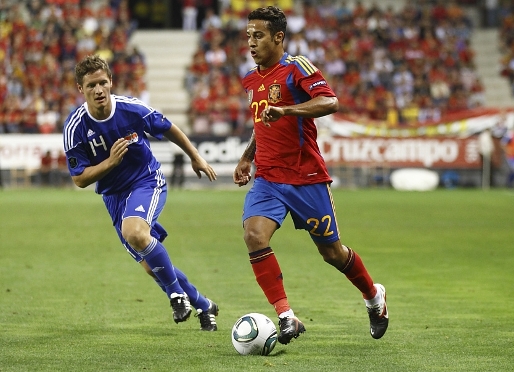 Nine FC Barcelona players have been called up for national team duty by Vicente del Bosque for next week’s games with the Czech Republic and Scotland, They are Valdés, Puyol, Piqué, Sergio, Xavi, Cesc, Thiago, Pedro and Villa.

Unlike the last international period, Martín Montoya of Barça B and the injured Andrés Iniesta are not included, but the now fit Gerard Piqué and Carles Puyol both get recalls. Jordi Alba, a Valencia player that played for Barça at youth level, has also been named in the squad.

Luis Milla has called on four Barça players for the Spain Under 21 fixture against Croatia, namely Bartra, Montoya, Planas and Sergi Roberto.

Other than the Spanish internationals, Mascherano and Messi have also been called up by Argentina, and Abidal for France, although the injured Alexis will be unable to play for Chile.