Iniesta plays some part in training

The 17 fit players trained this morning at the Ciutat Esportiva. Andrés Iniesta, who is still recovering from injury, appeared on the field and joined his team mates for some of the session.

More info
With the Champions League visit to Minsk now behind them, FC Barcelona have their minds firmly set on this weekend’s league trip to Sporting Gijón. At El Molinón on Sunday at 20.00, Guardiola’s side finishes its first marathon of the season before the international break. 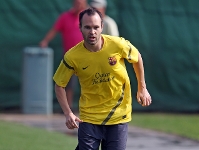 Iniesta on the pitch

The 17 first team players were joined by reserve team youngster Isaac Cuenca. It was also the first time that a training session featured Andrés Iniesta since the midfielder picked up a hamstring injury against Milan.

Carles Puyol trained in isolation after taking a knock to the ribs in the game with BATE Borisov. Meanwhile, Alexis has left the city and is now in Chile where he will continue to receive treatment. Afellay, who was also absent, will undergo surgery next Monday.