The 20 first team players that have travelled to Minsk have trained in the same Dynamo Stadium where they will play their second Champions League fixture on Wednesday night. 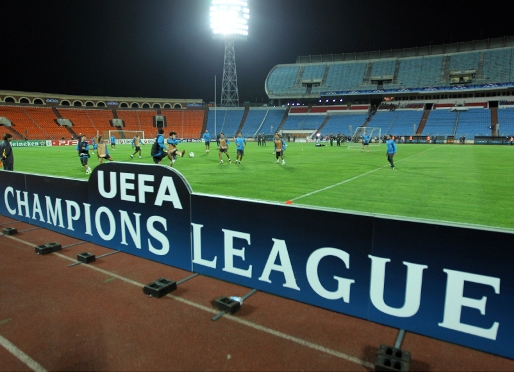 More info
FC Barcelona are about to play in Belarus for the very first time in their history. To prepare, they trained today in the Dynamo Stadium, Minsk with all 20 of the players named by Josep Guardiola (which include 18 first team players and Dos Santos and Cuenca of Barēa B). Two of these players will have to be struck off the list for the definitive squad that faces BATE.

The squad was greeted by pleasant temperatures of around 15ŗC and began the session with usual pre-match warm-up drills. It was announced the players will wear their black change strip on Wednesday, and today’s session was observed by some special guests, including President Rosell and several members of the Board who have travelled to Minsk to enjoy the historic occasion of FCB’s first ever trip to this country.

Afterwards, the Barēa directors went off to join the BATE Borisov officials for a pre-match supper.

Capacity for more than 40,000 spectators

The venue for the game is the Dynamo Stadium, which is normally the home of Dynamo Minsk, and not the Horodskiy where BATE Borisov usually play because the latter fails to meet the minimum UEFA requirements. So, this is not strictly speaking a home fixture for BATE either, although they are used to playing European fixtures in this facility, which holds more than 40,000 spectators.