Once again another Leo Messi exhibition. With the three goals he scored against Athletico Madrid, the Argentine star has now scored 192 goals for Barça, just two behind the legendary Hungarian striker Laszi Kubala, who scored 194 in total.

He’s only 24, but Messi’s are the stats of a veteran. He’s about to catch Kubala and is increasingly closer to reaching the top scorer in the history of the Club, Cesar Rodriguez (235). In an exclusive interview on Barça TV’s “El Marcador”, Messi expressed his desire to continue making history at Barça: "I’m pretty calm about it. I just take it a game at a time, but obviously I'm very excited about becoming top scorer. Many years have gone by and it’s still the same player [referring to Kubala]. Hopefully I can beat his stats. I want to continue breaking records here".

"I don’t think about the milestones ahead" 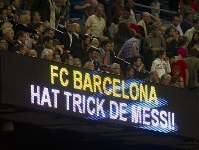 The great form Messi is in is not making him think about the challenges ahead, except team ones "We have to take it all bit by bit, without thinking about milestones. I think the most important thing for this team is to keep winning, and keep winning titles for us and the fans. This is far more important than any individual prize or statistic".

He’s already scored 14 goals against Athletico in the League, and they’re his favourite victim, ahead of Seville (10). Yesterday he scored a hat-trick, the eleventh of his career as a professional footballer, and his third against Athletico Madrid. As tradition dictates, the Argentinian took the match-ball home with him: "I’ll find a place to put it, alongside the other balls I have" said the striker. It was also his 150th goal in the Guardiola era.

Messi admits that they still have to adapt to the 3-4-3 system that Guardiola has used recently, but he’s pretty excited about it: "We feel pretty comfortable with it. There are some things we still aren’t doing well, just like with the previous system, but that's OK. It takes time and practice. We still aren’t totally used to it. Personally I'm pretty happy, because up front we have more space and we can link up better with the midfield players, and receive more passes".