The Barça defender has been given medical clearance and is therefore available for selection by Pep Guardiola for Saturday’s game with Atlético Madrid. Piqué hasn’t played since the Spanish Supercup game with Real Madrid.

More info
Piqué has been sidelined for a month with a hamstring injury which has meant he has yet to play any Liga games and also missed the European Supercup game in Monaco and the Champions League meeting with AC Milan. He hasn’t appeared for Barça since the second leg of the Spanish Supercup game at Camp Nou in mid August. 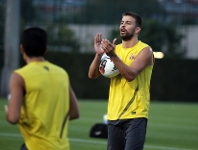 Pep Guardiola may well include the centre back in his team to face Atlético Madrid on Saturday. The team trained this evening as they get ready for that match, which kicks off at the Camp Nou at 10.00. Ibrahim Afellay was missing after tearing cruciate ligaments in his left knee on Thursday. Alexis Sánchez and Andrés Iniesta were also absent through injury.

Reserve player Marc Muniesa is also recovering from his own injury and joined the first team for training on pitch 2 at the Ciutat Esportiva.

This Saturday, as usual for home matches, the squad will train again at 12.30 in the morning behind closed doors at the Camp Nou.