Spanish League Round Up Week 4

Spanish League Round Up Week 4

The midweek games finished with a thrilling 4-3 win for Betis on Thursday night which leaves them sitting top with four wins out of four. 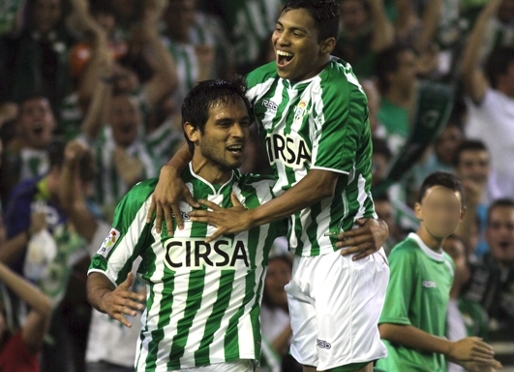 Photo: www.realbetisbalompie.es
The table is beginning to take on a familiar look, with Barēa, Madrid, Seville, Valencia and Atletico Madrid all jostling at the top, alongside the new boys Betis, revitalised Malaga and, maybe most surprisingly, the unbeaten Llevant who beat Rayo 1-2 to move level on points with Barēa. At the bottom, Sporting remain pointless and with just one draw form the first four games under Bielsa, Atletico Bilbao find themselves in the relegation places.

Betis got their fourth straight win of the campaign, overcoming Zaragoza 4-3, with two goals from Roque Santa Cruz. The game looked done and dusted on 70 minutes with Betis leading 4-1, but their keeper Casto was shown a red for a foul on Luis Garcia and Zaragoza pegged two goals back through Juan Carlos to make the new leaders sweat a bit in the final minutes. Malaga are up to third after winning their third game on the trot, beating Bilbao 1-0 with another Santi Cazorla strike –his fourth of the campaign – whilst Seville are level on points with Barēa after their goalless draw in Pamplona. Osasuna kept a clean sheet after Saturday’s eight at the Camp Nou, but lost the unfortunate Roversio –who put through his own goal against Barēa –with a muscle injury that will keep him out for three weeks.

Sporting Gijon are still without a win after their 4-0 defeat at Atletico Madrid, with Bilbao and Getafe, who were beaten 1-0 by an injury time winner from Walter Pandiani at Espanyol, just a point ahead. Atletico warmed up for Saturday’s trip to the Camp Nou with a convincing win, their second 4-0 in two games, with Falcao again in the goals. The Colombian striker has now got five in the last two matches and is level with Soldado and Messi as the league’s leading scorer.

Finally, Wednesday’s goalless draw against Racing leaves Madrid a point behind Barēa, after picking up just a point from their last two games, but captain Iker Casillas has appealed for the fans confidence and claims the team have put the bad result in Santander behind them.