The first mid-week round of games of the season got underway on Tuesday and will conclude at 22.00 on Thursday night, with Betis looking to take advantage of any points Barça take from the Mestalla to go top if they can win in Zaragoza. 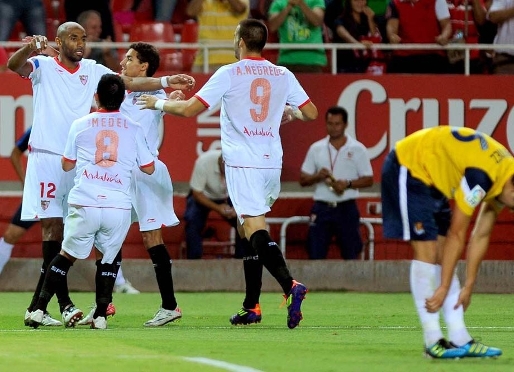 Osasuna and Seville shared the points in a goalless draw in Pamplona on Tuesday, whilst Real Sociedad beat Granada 1-0 and Villarreal got their first win by beating Mallorca 2-0, with Rossi and Nilmar on target, but the majority of the games of this round are being played on Wednesday and Thursday.

Madrid look to bounce back

Real Madrid travel to Santander to take on Racing this evening (20.00) with an urgent need to come back after their defeat at Llevant. Mourinho will be without the suspended Khadira and the injured Pepe and Coentrao, whilst Hector Cuper’s Racing have taken just one point so far and will themselves be without five or six first team players who are out injured. Malaga and Bilbao kick off at the same time at La Roseleda, with the hosts having won their last two games in contrast to Bilbao who are still without a league win under Bielsa,.

Atletico warm up for Camp Nou

Sporting visit Atletico Madrid still in search of their first points of the season, with Manzano no doubt looking for more goals from his summer signing Falcao ahead of their trip to the Camp Nou at the weekend and Llevant travel to Rayo for Wednesday night’s other game with both teams still unbeaten and level on points and goals scored(2) and conceded(1).

The midweek games finish on Thursday when Espanyol entertain Getafe and Betis travel to Zaragoza. The Seville team could go top out on their own if Valencia fail to beat Barça and they can overcome a Zaragoza side who have themselves bounced back from their opening week 0-6 thrashing by Madrid with a draw at Rayo and last weekend’s win over Espanyol at La Romareda.