Week three of the Spanish League this weekend sees the top three all playing away from home, whilst Granada and Sporting will both be looking for their first points of the campaign. 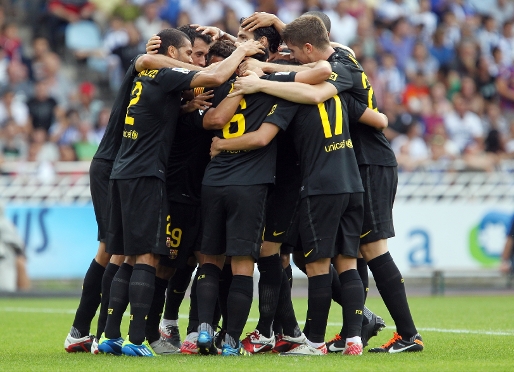 Newly promoted Betis have made a fine start to the season –winning both their first two games, although they’ve only managed two goals. On Sunday night they face their biggest test so far when they visit San Mames to play improving Athletic Bilbao, who will themselves be boosted by their midweek win in Europe. Betis boss Pepe Mel is proud of the fact that “we haven’t let in a goal yet –whilst every other team has conceded”, as to the Basques, Mel believes: “they played badly against Rayo, but improved against Espanyol and deserved to win. They are a competitive team with high level players who are dangerous when they come together”. The Betis boss also reckons his new signing Roque Santa Cruz “isn’t ready to play 90 minutes yet”.

Valencia in Gijon ahead of Barēa game

Valencia also took maximum points from their first two games, both played at home, and on Saturday they visit Gijon ahead of the midweek game against Barēa. Sporting lost their first two games, but boss Manolo Preciado insists: “we’ve got through rougher times” and has appealed to the fans to “give us more credit”. His opposite number at Valencia Unai Emery has warned his players they need to focus on the Sporting game ahead of the Barēa match and reckons “it’ll be a tough game in Gijon”. Real Madrid are the other team with maximum points and they visit Llevant on Sunday. Midfielder Xabi Alonso doesn’t think the players will suffer from any tiredness from their Wednesday night Champions League game: “we are used to playing every three or four days and the boss will choose the 11 players he thinks will do best”.

With Osasuna coming to the Camp Nou, the two other teams on 4 points, Real Sociedad and Seville meet at the Sanchez Pijuan on Saturday night. The Basque team will again be without Joseba Llorente and ex-Arsenal man Carlos Vela and will be looking to break a run of four defeats out of their last five visits to Seville. Villarreal got their first point of the season against Seville last weekend, but will be hopeful of adding to that when they visit Granada, who’ve yet to score having lost 0-1 to Betis and 4-0 to Malaga. Malaga themselves welcome back Julio Baptista for their trip to Mallorca. Two other teams without a win, Atletico Madrid and Racing play at the Vicente Calderon –though Atletico’s win over Celtic in the Europa League should boost Manzano’s team, who visit the Camp Nou next weekend.

Ex-Espanyol captain Luis Garcia gets an early chance to meet his old team on Sunday, when Zaragoza will be looking for their first goal of the campaign and Espanyol midfielder Joan Verdu admitted: “it’ll be strange to play against him –but I think it’ll be even tougher for him”. Finally, Getafe and Rayo are the two teams set to meet at noon on Sunday – but unlike last weekend’s scorcher in Seville, the weather forecast for Getafe is for a relatively mild 28 degrees.