ōWe want to get back on the winning track againö

Iniesta: ōwe want to get back on the winning track againö

Ahead of the Milan game, Iniesta stressed the teamÆs desire to get back to winning ways after the draw on Saturday: ōwhen you donÆt win, what you most want is to play again, feel as if you are doing things in the right way and taste victory again".

To be back in the Champions League and in the high quality game against AC Milan is a great place to come back from the disappointment at Anoeta and Iniesta insisted: “the team is feeling really good and here we are starting the Champions League campaign at home against a powerful opponent. It’s important to start on the right foot and taste victory again. We will be doing so with the maximum motivation and excitement”.

“Milan will always be a big team”

Iniesta is clearly a big fan of Milan: “they are a club with seven European Cups. It doesn’t matter who is playing, they will always be one of the big teams. However they play, it’s a privilege to have the opportunity to play against a team like them”. 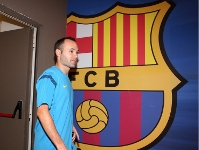 Iniesta regretted the absence of Zlatan Ibrahimovich for Tuesday’s game: “it’s a pity that he can’t play –he’s a great player and you always want to play against good players. He really wanted to come and play and it’s a shame he can’t make it. However, I don’t think that takes anything away from the game which should be fantastic”.

“I’ve got no problem with Van Bommel”

There were a number of questions about Iniesta’s attitude towards Milan’s Mark van Bommel, following the incidents at the World Cup final last summer, but he stressed that there was no problem: “fortunately I have never had any problems with anybody I’ve shared a changing room with. It’s true that during the final there was some rough play, but I prefer to think there was no malicious intent. He’s an opponent, but above all we are professional companions and I respect him in all respects”.