December 29 was the day that Ibrahim Afellay met most of his new team mates in his first training session as a Barça player. He looked quite at home from the start.

The festivities are over and the players got back to work today with one new face among them, Ibrahim Afellay, the star FC Barcelona signing of just five days ago. Approaching 17.30, the Dutchman met his new colleagues and coaches and an hour later joined them on the training pitch.

Ibrahim Afellay looked so at home on the field that it was hard to believe it was the first time he had played with the others. He warmed up and went through all the drills quite naturally. He was discrete about things, and accepted his roles gracefully – it doesn’t look like he is going to have too much difficulty settling in to his new routine. 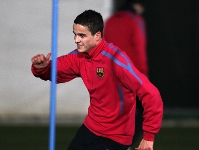 He won’t get a chance to make his official debut before January 5 in Bilbao, in the second leg of the Copa del Rey tie. That is because league inscriptions will not be made official until January 3, so it won’t be until the Bilbao game that he is available for selection. 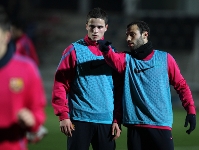 Afellay has had four days off since touching down in Barcelona on the 23rd and being officially presented on the 24th. Four days later he has finally been able to do what he does best – play football.