Ibrahim Afellay has arrived in Barcelona on Thursday to finalise the details of his signing for Barça. He posed for the typical photo in front of the club crest outside the offices and then attended a meeting to close negotiations.

At 11.50, Afellay and his representative touched down at El Prat airport. They were taken by coach straight to the FC Barcelona offices at the Camp Nou, where Afellay was able to marvel at a stadium he has never seen before. 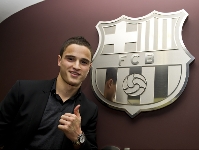 There were a number of Barça fans waiting at the stadium for pictures and autographs. Director of sport Andoni Zubizarreta and director of football Raül Sanllehí were also there to welcome him.

Next came the photo in front of his new club’s crest. The winter window signing then spoke briefly to Barça TV before moving indoors for the all-important meeting. 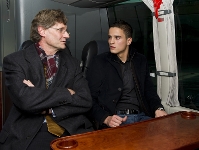 Later today, Ibrahim Afellay takes his medical examination, and provided there are no unexpected problems, he will be presented as a new Barcelona player on Friday. He will be giving a press conference (11.30 h). 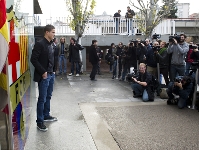 Apart from the Barça representatives, Ibrahim Afellay also found his brother waiting for him in Barcelona. He has flown up from Morocco in order to follow every detail of the process.