New record of 10 away wins on the run

New record of 10 away wins on the run

The win in Cornella meant that Barça have run up a record 10 consecutive away wins in La Liga between the end of last year and this season’s fantastic opening.

The win in Pamplona a fortnight ago marked the best ever start to a league campaign on the road and this Saturday’s stretched that run to eight wins, which added to the last two away wins of last season make it ten wins from the last 10 away games. 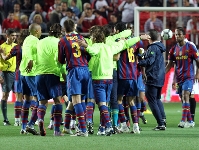 The run began at El Madrigal when Barça responded to Madrid’s pressure with a stunning 1-4 win and the week after they got another important win in beating Seville 2-3 at the Sanchez Pijuan to virtually ensure another La Liga title. 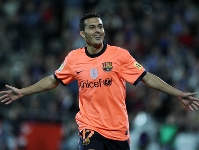 The team have scored an amazing 36 goals in those 10 games and conceded just 7, with Messi scoring 11, Pedro 6, Villa 4 and Bojan 4 times – making 25 of the team’s strikes. Valdes has remained unbeaten in four of the wins. 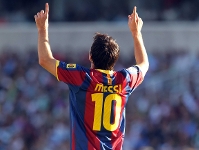 The biggest win in all of those games was against Almeria when the team equalled the competition’s biggest away score to win 0-8, matching Helenio Herrera’s team’s result against Las Palmas in 1959.