One year on from sixth title

One year on from sixth title

19th December marks the anniversary of Barça’s sixth title of the historic 2009, when they won the World Club Cup in Abu Dhabi. Since then, Guardiola’s team have gone on to take two more titles.

Barça made history on 2009 by winning all six competitions they were involved in, rounding off the year by taking FIFA’s top club trophy for the first time in the club’s history. Before that, they had won the La Liga, Spanish Cup, Champions League and Spanish and European Super Cup titles. 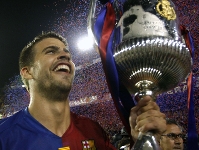 Pep Guardiola’s first year in charge will always be remembered as something very special by Barça fans. After assuring the league title, during a campaign marked by the famous 2-6 win at the Bernabeu, they went on to take the Spanish Cup for the first time in 11 years, and a few days later beat Manchester United 2-0 in Rome to take the Champions League again and record the first ever treble win by a Spanish team. 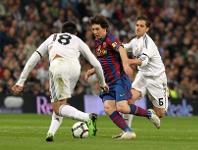 Two more titles came at the start of the 2009/10 campaign, as the Spanish and European Super Cups were won and it was all done with the team’s trademark passing game, a worthy successor to the Dream Team of the 90s and the five cup winning side of Kubala, Ramallets, Basora, César and company from the 50s. 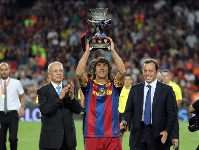 Although many expected 2010 to see a bit of a backlash, Barça continued to win trophies, taking La Liga with a record 99 points and the Spanish Super Cup, as Guardiola’s side continued to impress and build their legendary status. 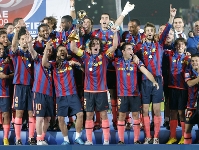 Inter Milan are the new World Club Cup champions after beating Mazembe 0-3 in the final on Saturday. Rafa Benitez’s team take over from Barça as the World Champions and ex.Barça favourite Samuel Eto’o scored one and made another to take the Man of the Tournament award.