Espanyol coach Mauricio Pochettino and his FC Barcelona counterpart Pep Guardiola had a relaxed meeting the day before the local derby to pose for the traditional pre-match photographs.

After the Blaugrana's penultimate training session Guardiola met the Argentinian trainer at the Cornellŕ-El Prat stadium, where the game will take place, at 14:15 and enjoyed each other’s company. Guardiola had watched the Champions League draw earlier in the day and then attended a press conference before travelling to the Blanc i Blau arena.

Both coaches stepped out onto the pitch at the ground with the media looking on expectantly and had a chat away from the glare of the photographers' lenses. Once they were ready they were handed their club's first team shirts and posed with their colours for the traditional photograph of the coaches that happens before every derby. 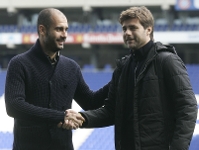 The event concluded with Guardiola and Pochettinto shaking hands as many reflected on what a Catalan derby it will be and how both teams are doing so well in the table with Barça on top and Espanyol in third place. 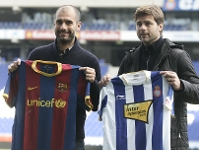