Valdés: “The team is really up for this game”

Valdés: “The team is really up for this game”

Víctor Valdés is clearly looking forward to Saturday’s game and although he admits “it’ll be tough”, he insists “the team is really up for this game”.

The Barça keeper told reporters: “we are as keen to win this as always, especially those of us who are from here. Since we were kids this has always been a special game and we know how important it is. We’ll be living it with a special intensity – this should be one of the toughest games of the season and I’d say we both have a 50% chance”.

“It’ll be a great game to be involved in”

Valdes is well aware that Espanyol have really improved and commented: “they are a very focussed team and they have the physical presence of last year, pressing as a group, as well as a much better technical level. I’m not saying that they didn’t do so before, but now they are playing good football. There’ll be a big atmosphere and it’ll be a great game to be involved in”. 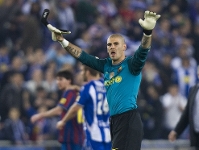 There will certainly be a great vibe in Cornella on Saturday night and Valdes admitted: “it’s the kind of atmosphere that every professional loves. I’ve played plenty of big games, but in the Spanish league, Cornellŕ-El Prat is one of the most intense grounds”.

Being the keeper at Barça hasn’t been synonymous with a lot of action of late, but Valdes is well aware that he holds a privileged position: “there are plenty of moments in a game when I enjoy just watching my teammates play, but just because the other team doesn’t get through very often, doesn’t mean I get bored. Both Pinto and I work hard on how we can participate in constructing moves from the back and you always have to keep your concentration”. 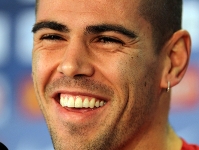 Asked about tomorrow’s Champions League draw, Valdes was non-committal: “any team we are drawn against will be difficult. Compared to other seasons, this will be a difficult last 16”.

However, Valdes did admit that there would be a special thrill in going back to play in Rome where the team won their third Champions League title: “we’d all like to play in Rome – it’s a special stadium for us”.