Puyol: “It’s the hardest game of the season”

Puyol: “It’s the hardest game of the season”

FC Barcelona captain Carles Puyol agrees with Pep Guardiola that Saturday’s derby at Cornellŕ-El Prat will be the hardest game of the league season.

At the presentation of former Barça coach Laureano Ruiz’s book ‘Fútbol profesional. Mi modelo de juego’, Carles Puyol spoke aboutn the game between Espanyol and Barça: “Both teams are in strong form, each has its qualities. It will be a difficult game for both teams and I think we are very equal”. 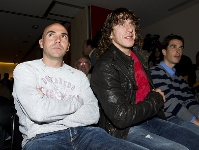 As Pep Guardiola said after beating Real Sociedad last Sunday, the game with the side coached by Mauricio Pochettino “is the hardest away game we have this season. But we are looking forward to doing well and coming back with the three points”.

The event was also attended by Espanyol’s Iván de la Peńa, who will miss the game through injury. “Espanyol is on good form and Saturday’s game will be interesting tactically. We probably can’t challenge FC Barcelona to the league title, but we can beat them at Cornellŕ-El Prat because we are so confident at home and have such great supporters. You can beat barça in one game”, he said. 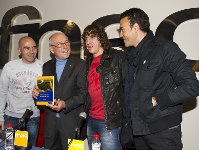 Laureano Ruiz, who played suich an important role at the club in the seventies, “there are two reasons why Barça had three Ballon d’Or nominees due to two paths converging over time: first, what happened in my time, which was later improved by Johan Cruyff, and the Guardiola factor. Thanks to these two, Barça now has the three best players in the world”.

On the derby, Laureano Ruiz said “it is very hard to stop the way Barça play, but anything can happen away to Espanyol”.