Bojan And Keita in training

Bojan And Keita in training

FC Barcelona’s first team squad returned to training on Friday morning after a day off and turned their attention to the visit of Real Sociedad this weekend as Bojan Krkic and Seydou Keita were back in action.

The focus returned to domestic matters after the Champions League win against Rubin Kazan on Tuesday. After enjoying a break from training on Thursday coach Pep Guardiola oversaw the session at the Ciutat Esportiva.

Thiago Alcántara was the only youngster promoted from the B side to train and he joined 19 first team regulars as they were put through their paces on a mild morning in Sant Joan Despí.

Krkic and Keita both returned to training and worked without any problems with the rest of the squad. Krkic received a knock during the game against Rubin and after spending Tuesday night in the Hospital de Barcelona he had two days of rest.

Keita missed out on the Champions League tie due to a knee injury, but he was able to work normally on Friday and is contention to be included in the squad for the weekend. 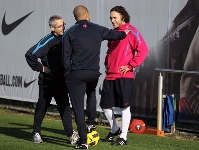 The only absentees from the session, which began with the usual warm-up exercises and routines, were Gaby Milito and Jeffren Suárez. Instead, the duo worked at the side on their individual recuperation programmes. Jeffren suffered a thigh strain against Rubin and will miss the visit of Real Sociedad. 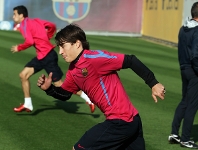 The Barça first-team squad will train once again on Saturday morning at 11am at the Ciutat Esportiva Joan Gamper. Afterwards, coach Pep Guardiola will attend a press conference.