Five B players in squad for Tuesday

Five B players in squad for Tuesday

Pep Guardiola has called up five B team players for the Champions League game against Rubin Kazin on Tuesday night. Five first team players will be rested, with the injured Gaby Milito again missing out .

Marc Bartra, Andreu Fontŕs, Thiago Alcántara, Jonathan dos Santos and Víctor Vázquez are the five youngsters called into the squad for Tuesday night’s game at the Nou Camp, with Alves, Xavi, Villa, Pedro and Keita given a rest.

Milito works out on pitch 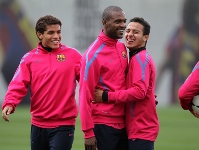 As well as the five players rested, Gaby Milito also misses the game, as after working out on the training pitch today he continues his recovery from the calf injury he picked up in the Spanish Cup game against Ceuta. 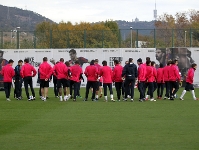 Barça are already through to the knockout stages as Group D winners and will stay overnight at a local hotel on Monday. The players have been called into the stadium for 20.15 tonight and will leave for the hotel at 20.30 with a training session at the Nou Camp scheduled for Tuesday. 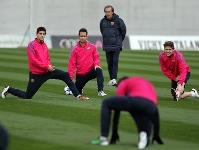 Seydou Keita is not in the 18 man squad as Guardiola decided not to risk him. Today he trained in the gym with a problem with his left knee and the boss decided to rest him for the European tie.