Busquets: “it was a hard day”

Busquets: “it was a hard day”

Sergio Busquets, agreed that the complicated travel arrangements during the day had meant “it was a hard day, we found it tough to get into the game at first”, but also expressed his overall happiness about the win.

After a four hour trip to Pamplona by high speed train and coach, Barça finally made it to the Reyno de Navarra and saw off Osasuna 0-3 , Busquets explained: “it was hard day. The Federation promised we could move the game if we were unable to travel to Pamplona, but they then changed their mind and didn’t keep their word”.

Busquets played for the whole 94 minutes and revealed: “we found it tough at first, because they came out strong and because of everything that had happened during the day”.

Most important thing is the 3 points 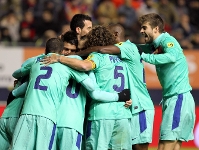 Busquets won 7 balls, made 70 passes and 14 clearances, Busquets explained: “we continued playing in the way we have been doing and we won. The most important thing though was the three points”. 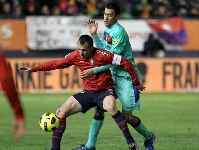