22 in squad for Copa Catalunya

22 in squad for Copa Catalunya

Barça have named 22 players to the play the three-way Copa Catalunya tournament in Sabadell on Wednesday. The seven first team players that didn’t start against Madrid are joined by 15 reserves. 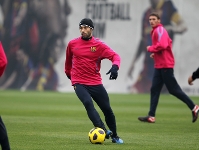 The only unavailable first team player is Gaby Milito, while the players that appeared in the clásico are to be rested. Barça will start the Copa Catalunya against Espanyol at 21.45 and will then face Hospitalet. All of the matches will be just 45 minutes long.

Oh, what a night!

The 22 Copa Catalunya players trained on Tuesday at the Ciutat Esportiva Joan Gamper, as did Alves and Abidal. The other players that were so impressive against Madrid worked out in the gym.

Before the session, the reserves made a pint of congratulating the first teamers on an amazing evening at the Camp Nou, where Real Madrid were devastated by a 5-0 hiding. 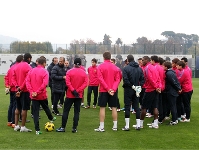 The team will leave the Camp Nou on Wednesday at 19.30 and will head for the Nova Creu Alta in Sabadell, where the three-way contest will take place.