FC Barcelona trained on Sunday evening as preparations continued unabated for the visit of Real Madrid. Pep Guardiola had 18 players at his disposal with only Gaby Milito and Thiago Alcįntara absent.

The Blaugrana squad were put thought their paces for the second time this weekend with the build-up towards el clįsico occupying everyone’s thoughts. Having had Friday off, after booking their place in the next stage of the Champions League with a win in Greece against Panathinaikos , the players returned to work on Saturday and again on Sunday as the coaching staff made last minute checks on every aspect of the game ahead.

Guardiola focussed the training on Sunday on tactics as there was just over 24 hours to go before the hotly-anticipated encounter when the players strolled out on to the pitch to stretch their legs. The cold played its part as the players dressed appropriately to ensure that none of them were affected by the onset of winter temperatures. Milito was not present as he continued to work on his recovery programme from injury while Thiago appeared for the juvenil side in their win over Espanyol. 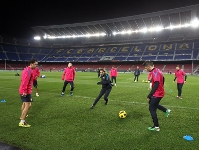 After training on Sunday evening the players all had a meal together in Camp Nou before heading home. They will return again at 11.30 on Monday morning to have a final work-out. The session will be behind closed doors as the last-minute details are sorted out.