The day Leo made his debut against Mourinho

The day Leo made his debut against Mourinho

Leo Mesi made his debut with the first team on 16th November 2003 in a friendly against Oporto when he was just 16 years old. Frank Rijkaard was in charge of the Barça team that day and Oporto were managed by none other than Jose Mourinho.

The game was held to celebrate the opening of the Do Dragao Stadium between Oporto and a Barça team full of fringe players and young promises, including the slight figure of a 16-year-old youth team player from Argentina, Lionel Messi. 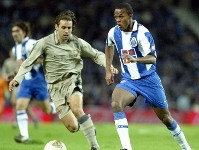 Frank Rijkaard took two B team players, Expósito and Tiago Calvano and four youngsters from the Youth A team, Ginard, Jordi Gómez, Riera and Messi and except for the keeper Ginard, they all featured in the 2-0 defeat.

Messi came into the game after scoring a hat trick for the Youth team against Granollers and he showed from the off that he wasn’t at all overwhelmed by facing the then UEFA champions. Coming on for Fernando Navarro halfway through the second half, Messi came close on two occasions and during his 23 minutes on the pitch he really put Mourinho’s defensive system under pressure.

Barça TV the day after 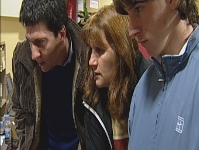 The day after the game, Messi came into the Barça TV studios to watch the game with his parents and he explained: “it was such a great experience to be able to play with established stars like Luis Enrique Xavi or Márquez – it really made an impact on me”.

Leo confessed: “I didn’t tell any of my mates that I was maybe going to play and they were all surprised to see me on the TV. I’ve fulfilled a dream and now I can’t wait to play with the first team again”.

On Monday, seven years after that first contact, Leo Messi and Jose Mourinho will again come up against each other, but this time it won’t be a 16 year-old making his debut that the Portuguese boss has to deal with, but the best player in the world! 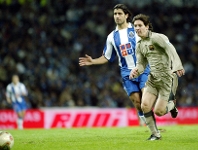 That 2003-2004 season proved to be a very special year for Messi. He began the season with the Youth B team run by Guillermo Hoyos, but only played one game before being moved up to Youth A under Carlos Pérez Rojo, where he stayed until Christmas when he began to play for Pep Boada’s Barça C, moving to Barça B under Gratacós in February before rejoining the Youth B team for their cup competition at the end of the season, where he proved decisive in them taking the title.