Vassilis Tsartas visited the FC Barcelona team hotel in Athens on the morning of the Champions League against Panathinaikos and met with coach Pep Guardiola.

The former Sevilla and Greece star heaped praise on the Blaugrana boss as he spoke to the media after his meeting. “It is always a pleasure to talk to someone like Pep,” he said.

Tsartas knows Guardiola as the pair played against each other in numerous midfield battles during the 1990’s and he is a big fan. “I always admired the way he played football and I think that he was coaching on the pitch even back then,” he added.

While Guardiola has won most of the plaudits for his time in charge of Barça, Tsartis believes that his coaching staff also deserves praise. “You need to have a good people at your side and I think Pep has them,” he explained. “As well as transmitting your ideas to the players, it is fundamental to have people with talent, quality and a collective spirit with you.” 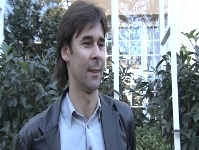